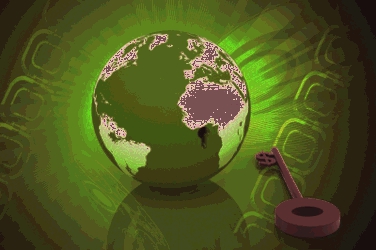 In the process of symmetric-key encryption, each computer has a secret key code. It can be used to encrypt a load of information just before it is sent over the live network to another computer that wants to receive it. Symmetric-key demands to know which computers will be taking part in the exchange so that you can install the key on each computer. Key encryption is basically the same as a really secret code that both of the two computers will be demanded to know so they can both decode the information.

The code is the 'key' to decoding the message

To put it more simply, here is another example for you:

You make a message that is coded to send to a friend that you trust, each letter in the secret message is replaced with the number that it goes with in the alphabet. So 'A' becomes '1,' and 'q' becomes '17'. You have already told a trusted friend that the code is 'Alphabet=number'. Then your trustworthy friend gets the message and decodes it with the 'key code'. Anyone else whomay see the message will only see random numbers.

All computers use this to send sensitive information and keep it safe so only the person who is receiving and sending the information can read it.